This is the ultimate, the tops, the absolute best treatment to any re-release of an adult film. The amount of love and passion that went into restoring the film, the art, the campaign, producing top notch extras, culling and licensing music tracks, etc. We have truly uncovered much of the story behind Misty, and have restored the film to look better than the day it was released theatrically. It has been the most involved project ever taken on by Distribpix Inc. and the DVD and Blu packages, have taken about 6 months, and even longer in cases of the CD, but we are finally preparing to bring all 3 of these epic packages to market!

Sorry for the wait, but like anything that is treated with love and care and passion, it can never be rushed, once you rush, you take the risk of jeopardizing the task at hand. We stuck to our gameplan from the very beginning of the Metzger restorations, and for Misty, we did the same, although we were a bit ambitious in some of our goals, it totally paid off. The idea as many of you know, is to treat these releases with the same gusto as a company like Universal or Criterion, many people say we are like the Criterion of adult and sexploitation, because we treat the films the same way and do even better restorations than some of the majors, and not too mention the extras. Are they the best, most professionaly produced videos ever made, of course not? But they are fucking awesome extras and if you are a fan of learning about a film and you enjoy extras, you are in luck. We have a mix of so much content, it was a very difficult authoring procedure for both the blu and DVD’s- as there are lots of menus and sub menus, but the content is kick ass!!

Remember, if this was just about turning a quick profit, I could have had all of these transferred in HD and put on single economy version DVD-5’s-with no extras, to whore out to the adult market, but anyone can do that, and they do it every day. Where is the fun in that? Where is the challenge? Those guys don’t love film, and they don’t care, it is about a dollar, and that is fine. It works for them. I was in that market for a long time, and it is not a fun place. For the most part, the DVD buyers are clueless, and would not know a Metzger from a Max Hardcore!!

For me, I would rather create something unique, special, and harvest the best package I can to offer the film fans, who enjoy these types of releases- over the top, done with love and care, every aspect of it – right down to the nitty gritty details, it is like you become intimate with the prodcut and borderline obsessed with all aspects of it, no matter how insignificant.

With all of that said, I am proud to say that we are in the final process of production/manufacturing…..material is coming back to the warehouse and project misty packages are being assembled. We are still waiting for the Blu-Ray, which is in production, and it is REGION FREE, as we have customers all over the world and never lock it to any single region.

I am happy and also very burnt out on Misty Beethoven, I love her so much, this film is so amazing. I have literally spent about 5 months straight doing nothing but working on some aspect of Misty Beethoven, hundreds and hundreds of hours(not too mention my partner Ian Culmell, who has a full-time job as well)-(the film transfers, the documentary-scripting, shooting,editing, artwork, weeks of authoring/encoding for Blu-Ray, countless hours of QC, the project misty campaign,etc.). No matter what I will be able to look back at this experience in the future, knowing that I gave it my all and tried very hard, and we think we succeeded on finally showing the world, how a small- independent film company with no funding, can produce amazing packages, on par with other great Hollywood restorations.

If we were able to get some solid and fair distribution channel, we would be able to produce more packages like this, we really enjoy it. But without a firm distribution channel, it is too difficult to balance the profit/loss for a project of this scale. A film like Misty totaly deserves this treatment and quite frankly, so do many other adult films from the golden age of adult filmmaking. 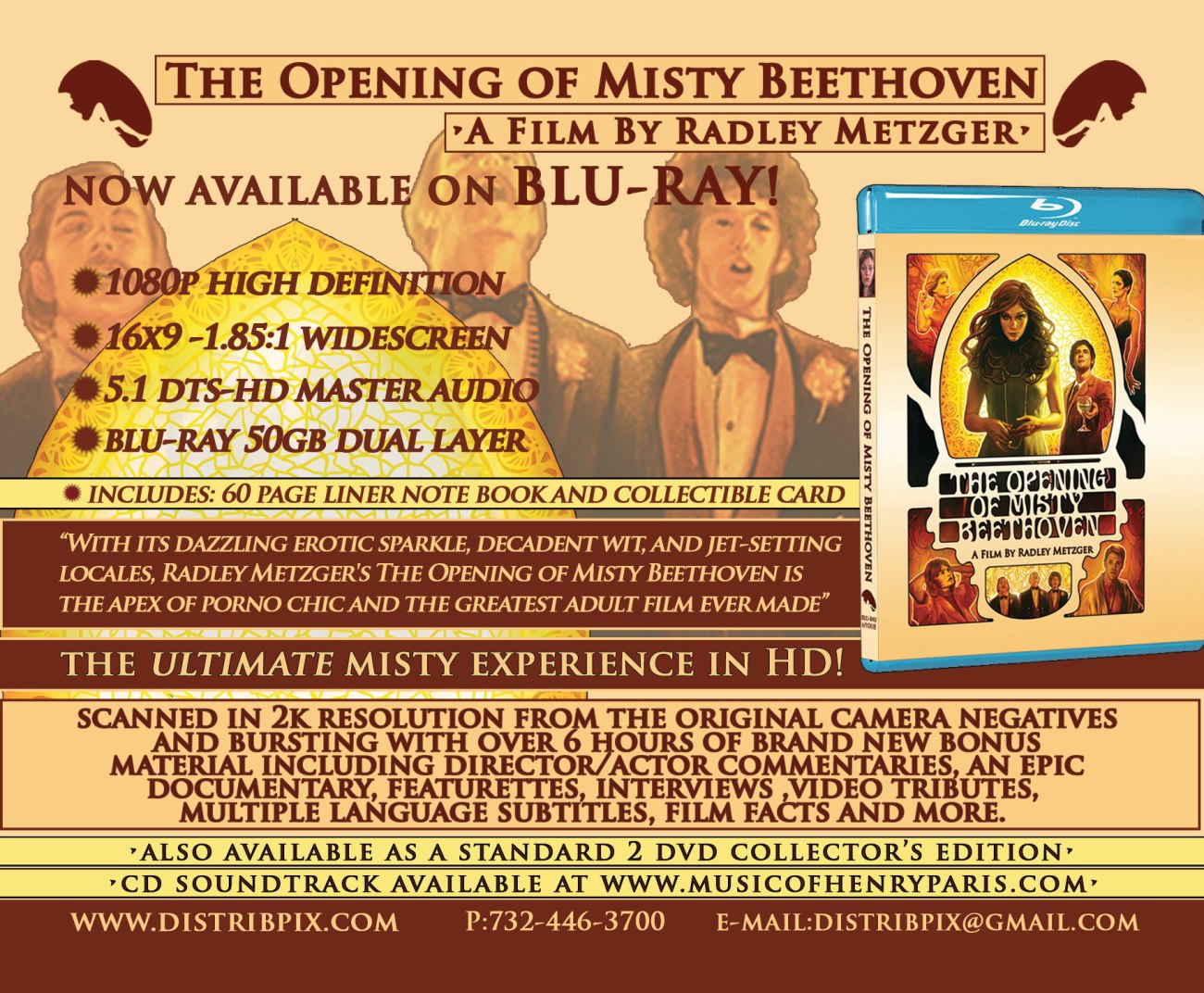