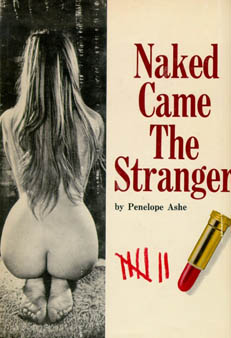 “Naked Came the Stranger,” Penelope Ashe’s torrid novel of adultery and revenge, exploded onto the literary scene in the summer of 1969. Ashe, a “demure Long Island housewife,” regaled every television and radio show host who would listen to her with tales of how she brought the sultry page-turner to life.

The literary establishment was scandalized, both by the explicit and pervasive sexual content and by the poor quality of the writing itself. The book-buying public didn’t care. “Naked” shot to the top of the bestseller lists, blazing through its initial run of hardcovers in a matter of weeks.

Then on September 1, 1969, the David Frost Show introduced its guest for the evening, “Penelope Ashe.” As the orchestra struck up a rousing rendition of “A Pretty Girl is Like a Melody,” nineteen men filed onto stage, single file. The hoax was revealed and a media firestorm ensued.

“Penelope Ashe” did not exist. Hoax-ringleader Mike McGrady’s sister-in-law played the role for the press and a cadre of 24 Newsday writers (19 men and 5 women) had written the book. Each had provided a chapter without any knowledge of what the others had written, under strict orders to avoid character development, plot advancement, and quality writing at all costs. Chapters deemed too high in quality were rewritten. A two sex-scene minimum per chapter was rigidly enforced.

McGrady, incensed that poorly-written sex novels like “Valley of the Dolls” topped the bestseller lists while talented writers languished in obscurity, had set out to prove a point. Choose a sexy title, slap a naked woman onto the front cover, fill the pages with explicit sex, and the novel would sell. Any novel. Even if the writing was terrible, the plot non-existent, and the style a mishmash of two dozen different authors. He made his point in spectacular fashion.

When Radley Metzger brought the story to the screen half a decade later, he kept the title, the character names, the episodic structure, and the basic plot. But he jettisoned the hackneyed dialogue and poorly-written encounters, replacing them with his trademark clever staging and sparkling wit.

Nevertheless, the movie was a hit, dethroning “Monty Python and the Holy Grail” to top the New York box office. Radley rode the wave of success to bankroll his next film, the ambitious and remarkable “The Opening of Misty Beethoven.”

For all the sordid details of the “Naked Came the Stranger” hoax, quotes from the participants, the backstory of Radley’s adaptation, and more, check out film historian Benson Hurst’s incredible writeup in the DVD’s 40-page liner notes booklet.