I am proud to announce that as part of “The Passions of Carol” Platinum Elite Collection, we will be including a full- feature length, audio commentary with the film’s creator and director, the legendary Shaun Costello. This was the first time that Shaun has ever recorded a commentary over one of his films and it is an honor to be able to bring you this great footage. We shot/recorded over this past weekend in NYC and also got to spend some time with Shaun and walk around the city and talk about how much the city has changed…we walked past the old capri cinema…we walked around 42nd st, even checked out SHOW WORLD, man has it changed. He told us some of the greatest stories as well, really a great time and the commentary is brilliant….. just very informative and Shaun talks about the filming, the cast, the producers, the music, and also some great stories. The commentary was produced by Distribpix and conducted by Chicago -based, film historian, Joe Rubin. Being a huge fan of Costello’s work, combined with his ultimate love for “The Passions of Carol” made Joe a shoe -in to moderate the commentary and he did a wonderful job.

Release date is ASAP, we are trying for a Christmas release date!

The first one was taken in front of what is left of the legendary Show World, it is pretty sad and I even took a photo inside  just for shits and gigs and the Clerks made me erase the photo….Dam, I was just having fun, if they only knew how much money I had spent there in my teens!!LOL. Besides, there is nothing in there but crap, really sad. I remember when at any given time there were a dozen girls doing live shows, but that was 20 years ago…dam i am getting old!! Now it is filled with old magazines and the worst bottom of the barrel porn available.

The second photo was shot in front of an abandoned lot, which used to be the Capri Cinema. It was great to walk around the “new” Times Square, with a legend like Shaun, it was also tough to see the “new” 42nd street. It is still NYC, but not the way it used to be, especially for guys like Shaun, who used to live, work and play in the DEUCE!!

Joe and Steven with the Legendary Shaun Costello 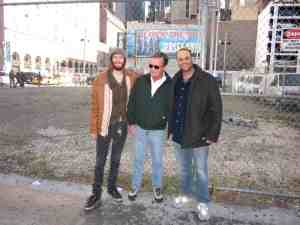 Taken in front of empty lot ( used to be CAPRI CINEMA)